To say the Colts soured on Carson Wentz probably undersells this situation. While Indianapolis landed a reasonable return for its latest one-and-done starter, the team did not play this process coyly.

The Colts’ decision-makers publicly did not commit to Wentz, after Jim Irsay called a meeting in the wake of the team’s end-of-season collapse. The Colts were drifting away from Wentz before those two losses, per The Athletic’s Zak Keefer, who adds in an expansive piece the former No. 2 overall pick’s leadership qualities — or lack thereof — bothered the team to the point it could not count on its recent hired gun. 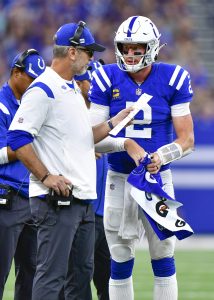 Well aware of the Colts’ course change, Wentz attempted to meet with Irsay in the past month. Irsay declined that meeting, Keefer reports, effectively ending the Wentz era before the team’s Wednesday trade with Washington. The Wentz deal leaves the Colts as a clear have-not at quarterback, but the team steadfastly abandoned ship after one season. Whomever Indianapolis starts in Week 1 of next season will be the sixth different passer to open a Colts season in the past six years.

The Colts did get the Commanders to pay up, relatively speaking. Washington initially offered fourth- and sixth-round picks for Wentz, Keefer notes. Indianapolis moved the terms to two thirds — the 2023 third can move to a second based on playing time, similar to the first-rounder exchanged in 2021’s Colts-Eagles swap — and a swap of second-round picks. The Colts now hold the No. 42 pick in the 2022 draft, climbing up five spots. Indy does not have a first-rounder in this draft, having traded it to Philly for Wentz.

Washington had offered three first-round picks for Russell Wilson, per Grant Paulsen of 106.7 The Fan (on Twitter). The Commanders offered at least that, per the Washington Post’s Mark Maske and Nicki Jhabvala, but the Seahawks traded Wilson to the Broncos. Washington let it be known it was seeking a veteran quarterback, and while Deshaun Watson was also on the team’s radar, it pulled the trigger on the Wentz trade. Indeed, Wilson refused to waive his no-trade clause for the Commanders, Charles Robinson of Yahoo.com tweets. By all accounts, Wilson had zeroed in on Denver this offseason.

As for Wentz’s Colts fit, Keefer adds the franchise’s issues with the sixth-year veteran began before Week 1 of last year. A lack of leadership and a resistance to hard coaching — a complaint mentioned in the fallout from Wentz’s Eagles run — invited early Colts doubt about Wentz. Irsay had also expressed frustration about Wentz’s refusal to be vaccinated against COVID-19. Wentz landed on the reserve/COVID list before the season and ahead of Week 17. Although Wentz finished the season with a 27-7 touchdown pass-to-interception ratio, he topped 200 passing yards just twice in his final eight games and ended the season with a career-low 4.3 QBR against the Jaguars.