After Mac Jones suffered a serious injury on the final play of yesterday’s game, the Patriots expressed concern that their franchise signal-caller had suffered a high ankle sprain. After further testing today, it is apparent that he will likely miss at least some time. 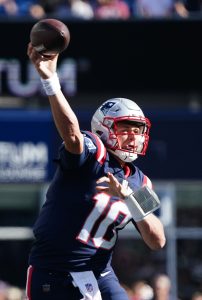 NFL Network’s Mike Giardi reported yesterday (via Twitter) that New England feared Jones had suffered tendon and/or ligament damage – something which would not have shown on his x-rays, which came back negative. Earlier today, his colleague Tom Pelissero tweeted that the 24-year-old is indeed dealing with a “pretty severe” ankle sprain.

At this point, it is unclear whether or not surgery will be required. Still, Pelissero adds, it is unlikely the former first-rounder will be available for New England’s upcoming game against the Packers. If Jones does end up undergoing a procedure, NFL Network’s Ian Rapoport notes that it would be ‘tight-rope surgery,’ something which was developed at Jones’ alma mater, Alabama (video link). The operation, if needed, would be aimed at accelerating the recovery process.

Assuming Jones is sidelined, New England will turn to veteran Brian Hoyer, who is in the third year of his most recent Foxboro stint. His last start came in 2020, while his most recent win dates back to 2016 when he was with the Bears. The 36-year-old has plenty of experience in the Patriots’ offense, though, and would likely be more reliable than rookie Bailey Zappe.

Yesterday’s loss dropped the Patriots to 1-2, and Jones’ second season has seen him throw five interceptions against just two touchdowns so far. Still, any absence would represent a significant loss for the team’s offense, which is experiencing growing pains in the post-Josh McDaniels era.