Jonah Jackson has not played since the Lions’ Week 1 Eagles matchup. The Pro Bowl guard played every Detroit offensive snap in that game, but a finger injury sustained in practice days later has kept him sidelined since. 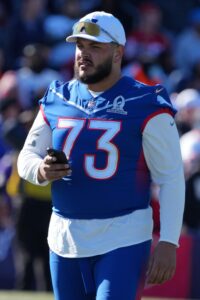 Rather than go through with a surgery that would have led to an IR stay, Jackson is attempting to rehab this issue — a bone and ligament malady in his right ring finger — in order to return quicker, Dave Birkett of the Detroit Free Press notes. The third-year blocker is aiming to return before the Lions’ Week 6 bye; he is not expected to play against the Seahawks this week. Jackson cannot currently bend the injured finger, per Birkett, who adds this issue is supposed to require a splint for six weeks.

A Pro Bowl alternate in 2021, Jackson has become a quick study in Detroit. The Lions’ previous regime selected him in Round 3 out of Ohio State (after four years at Rutgers), and the Big Ten-developed lineman did not miss a start for the Lions over his first two seasons. His absence this year has further wounded a Lions line missing multiple bodies.

Lions backups have been needed at both guard spots this season. Right guard Halapoulivaati Vaitai underwent back surgery and is going through a lengthy recovery timetable; he has not played this season. Center Frank Ragnow, after a toe injury forced him to miss most of last season, missed Week 2 with turf toe. Backup guard Tommy Kraemer is on IR. Detroit’s starting O-line has not played a snap together this season, and Week 1 marked the only time four of the Lions’ front five have appeared in the same game.

Taylor Decker missed eight games last season with an injury to his left index finger, the longtime Detroit left tackle did undergo surgery, however. Jackson has resumed work on a side field but has not logged an official practice since sustaining the injury. Ragnow missed the Lions’ Wednesday practice with the toe injury but played through that ailment last week. Their interior issues notwithstanding, the Lions will enter Week 4 with both tackles (Decker and Penei Sewell) available.