The Rams lost their first season opener of the Sean McVay era last night, and the team has received more unwanted news today. Rookie running back Kyren Williams suffered a high ankle sprain during the first quarter of the team’s loss to Buffalo, and could miss up to six weeks (Twitter link via ESPN’s Field Yates). 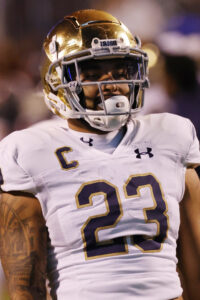 The fifth-rounder had already faced injury problems before last night. Williams underwent foot surgery this offseason which cost him time during training camp. He was expected to operate as the team’s No. 3 back behind Cam Akers and Darrell Henderson.

That pair combined for just 47 yards on the ground yesterday, however, in their first game action after an offseason which included injury concerns of their own. Akers has become the subject of scrutiny after an underwhelming return from last year’s Achilles tear, the continuation of which could have opened the door to more opportunities for Williams.

The Notre Dame alum saw just four carries as a freshman, but was highly productive in the two proceeding campaigns. He topped 1,000 rushing yards in 2020 and 2021, adding 672 yards in the passing game across those two seasons. Barring a return to form from Akers and Henderson, that receiving ability will be missed by the defending champions.

Jourdan Rodrigue of The Athletic tweets that Williams will undergo surgery today. His rehab process (which she pegs at 6-8 weeks) will be worth watching as the Rams look to get back on track without him.