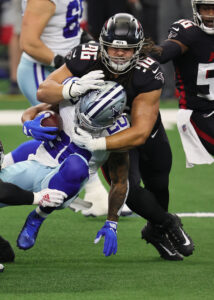 Although Davison will begin his Browns run on their P-squad, the team plans to promote the veteran starter soon. Davison, who has started 86 games with the Falcons and Saints from 2015-21, has not been with a team since his Atlanta release in March. The Colts auditioned Jones on Monday, Joel Erickson of the Indianapolis Star tweets.

These Atlanta imports will arrive after Austin Ekeler shredded the Browns’ defense for 173 rushing yards in Week 5. A week earlier, the largely Cordarrelle Patterson-less Falcons used the ground game to hand the Browns a loss. Cleveland now ranks 28th against the run. The team lost second-year linebacker starter Anthony Walker against the Steelers in Week 3 and did not do much to add help at its needy defensive tackle spot this offseason, despite holding the NFL’s most cap space for months.

Davison, 30, will not eat into Cleveland’s cap room much, and he is a bit removed from his best seasons. Pro Football Focus viewed Davison as a plus run-stopper during the late 2010s but was not especially high on the veteran’s work during his final two Falcons seasons. Atlanta released Davison after decreasing his playing time last year. The 309-pound defender played 43% of the Falcons’ defensive snaps in 2021. While it represented a slight playing-time reduction, it was nearly in line with his previous starter years in the NFC South.

The former Saints fifth-round pick signed a three-year, $12MM Falcons deal during Dan Quinn‘s time in Georgia. The Falcons were running a 4-3 scheme at that point; the Saints ran a 4-3 set during Davison’s four-season New Orleans run. The Browns use a 4-3 scheme and moved on from their two primary D-tackles from last season — Malik Jackson and Malik McDowell — in the offseason. Davison may not supplant starters Taven Bryan or Jordan Elliott immediately, but he should provide a decent depth piece for a defense that features proven performers at every other position.