OCTOBER 5: Taylor’s ankle injury will cause him to miss his first NFL game due to injury. The Colts have ruled out their star running back for Week 5. The reigning rushing champion, who also went through his Wisconsin career without missing a game due to injury, was wearing a walking boot at Indianapolis’ Tuesday practice, Stephen Holder of ESPN.com notes. Prior to suffering the ankle malady, Taylor was dealing with a turf toe bout. Taylor’s only previous NFL absence came in 2020 due to landing on the reserve/COVID-19 list.

OCTOBER 3: The Colts fell to 1-2-1 on the season Sunday, and saw their most notable player on both sides of the ball suffer injuries. Running back Jonathan Taylor picked up an ankle injury during the game, leaving his Week 5 availability in question (video link via Ian Rapoport of NFL Network). 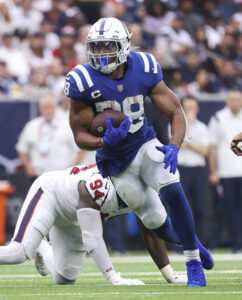 Rapoport notes that the injury isn’t expected to be particularly serious, and ESPN.com’s Adam Schefter adds the reigning rushing champion has a chance to play against the Broncos on Thursday (Twitter link). However, the fact that the Colts are on a short week could leave Taylor sidelined for that contest. He underwent testing immediately following Sunday’s game, the results of which will go a long way in determining if the Colts have their top offensive weapon available.

The 2021 Offensive Player of the Year was limited to just 42 yards on 20 carries yesterday, the latest in a string of underwhelming performances for he and the Colts. On the season, Taylor has amassed 328 rushing yards on an average of 4.0 yards per carry – a far cry from the 5.5 he posted last season en route to becoming the league’s top rusher – and a single touchdown.

Should the Wisconsin product miss Thursday’s game, Nyheim Hines would take on the starter’s role. He has received just eight carries so far, resulting in 11 yards. As usual, though, he has been more effective in the passing game, posting 17 catches for 113 yards. Former UDFA Deon Jackson — who has seen just two offensive snaps this season — is next on the depth chart, though ex-Bronco Phillip Lindsay is another option on the practice squad.

The Colts’ offense has struggled throughout the campaign, and the loss of Taylor would put even more pressure on the unit. Key defenders Shaquille Leonard and Tyquan Lewis have already been ruled out for Thursday’s game, as noted by Zak Keefer of The Athletic (Twitter link). Whether or not Taylor can suit up will be a situation worth watching over the coming days.