Jerry Jones stirred the pot recently when he said he’d welcome a quarterback controversy between Dak Prescott and Cooper Rush. However, the Cowboys owner and GM quickly walked back his comments, stating definitively that Rush won’t supplant Prescott as the starter going forward. 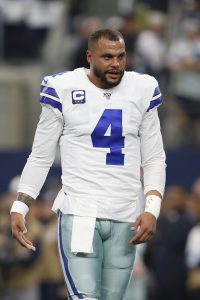 “No. No,” Jones replied when asked if there was a scenario where the team would opt for Rush over Prescott (per Clarence Hill Jr. of the Dallas Star-Telegram). “As I see it right today.”

Rush has guided the Cowboys to three consecutive victories, and he’ll likely earn another start this weekend as Dak continues to recover from his hand injury. Jones noted that Prescott still can’t grip a football despite having his stitches removed more than a week ago. Considering the team’s public stance that their starter would need a week of practice before returning to the field, Hill opines that Prescott won’t be ready for this weekend’s showdown against the Rams.

The Cowboys never placed the QB on the injured reserve, leading some to believe he’d be able to make a return to the lineup before Week 6. Prescott himself stated that he was eyeing a Week 5 return date. It sounds like that won’t be the case, but that doesn’t bother Jones or the organization. Instead, the team sounds content with Dak making his return on October 16 against the Eagles.

“Well, I know that it’s better, and I know that he’s going to go out there every day and make progress toward being able to grip the ball,” Jones said. “I don’t know that you could ask for better news technically, physically in how it’s responding, how it’s healing so to speak. And, so, all of those things are on go, and I don’t know that you could make any more progress. There’s some things here about healing that I often say only the man upstairs knows how that works. But he’ll have a big week and he’ll be hard on himself getting ready to go.”