OCTOBER 2: McCaffrey is indeed expected to play against the Cardinals in Week 4, per Adam Schefter of ESPN.com (Twitter link).

OCTOBER 1: Despite McCaffrey not practicing at all this week, there remains a “strong chance” that he will be able to play on Sunday, as noted by Aaron Wilson of Pro Football Network. Quarterback Baker Mayfield echoed the uncertainty surrounding the situation, however, so McCaffrey’s status could ultimately come down to game time.

SEPTEMBER 29: Christian McCaffrey was out of practice once again today, but there’s optimism that he’ll take the field this weekend. NFL Network’s Ian Rapoport reports (via Twitter) that the Panthers believe there’s still a chance that their star RB will play on Sunday against the Cardinals. 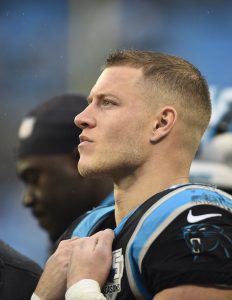 McCaffrey suffered a quad injury during Sunday’s win over the Saints. He was also listed on last week’s injury report with ankle stiffness, but it’s uncertain if that ailment contributed to his latest injury. When asked about the injury, offensive coordinator Ben McAdoo refused to say if his starting running back will play this weekend.

The two-time All-Pro has dealt with his fair share of injuries throughout his career, and he’s missed 22 games over the past two years. When he’s on the field, he’s one of the most explosive players in the NFL, and he’s shown that in his three games this season. So far this year, McCaffrey has 300 yards from scrimmage and one touchdown on 60 touches.

Chuba Hubbard got 10 starts as a rookie while filling in for McCaffrey, and he’d likely see a significant role if his teammate is inactive. The Panthers are also rostering D’Onta Foreman, who started three games for Tennessee last season in place of Derrick Henry.