Despite a high cap number and two 2021 arrests on gun charges, Frank Clark managed to stick around with the Chiefs this year. But the veteran defensive end will be forced out of the picture for a stretch.

The NFL handed Clark a two-game suspension Tuesday, Adam Teicher of ESPN.com reports (on Twitter). The personal conduct policy ban will sideline the Chiefs’ top edge rusher for matchups against the Titans and Jaguars. Those games come after Kansas City’s Week 8 bye. No appeal will take place, Mark Maske of the Washington Post tweets. 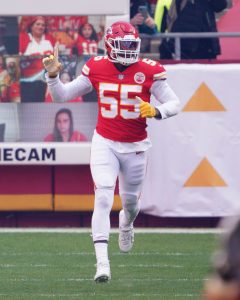 Clark, who agreed to a reworked contract to stay with the Chiefs in March, has faced NFL punishment for over a year. Both his aforementioned arrests came during the 2021 offseason. While Clark resolved those criminal issues in September, the league still acted here.

In March 2021, the three-time Pro Bowler was arrested for possession of a concealed firearm. In June 2021, he was arrested again when police officers conducted a traffic stop and noticed an Uzi in an open bag in Clark’s vehicle. Clark pleaded no contest to two counts of misdemeanor possession of an assault weapon, and he was sentenced to one year of probation and 40 hours of community service. Although a Clark domestic violence incident at Michigan led to his dismissal from the Wolverines in 2014, this is the veteran pass rusher’s first NFL suspension.

While Clark was not especially consistent during his first three seasons as a Chief, the team brought its 2019 trade acquisition back for a fourth year by redoing his deal. The former Seahawks second-rounder is now attached to a two-year, $29MM agreement. This suspension would allow the Chiefs to void guarantees, but no guaranteed money remains on Clark’s deal beyond 2022.

This season, Clark has three sacks — including a Week 7 safety in the Chiefs’ rout of the 49ers — to lead Kansas City edge rushers. Although the team added Carlos Dunlap and drafted George Karlaftis in Round 1, Clark’s top sidekicks have combined for two sacks (both Dunlap’s). More will be on Dunlap and Karlaftis’ shoulders when the AFC West-leading team returns from its bye, though the Chiefs still have defensive tackle Chris Jones (five sacks) anchoring their pass rush.