The Ravens played J.K. Dobbins‘ return from his severe knee injuries cautiously, keeping their running back off the field for this season’s first two games. Baltimore has also kept Dobbins’ carry count under 10 in three of the four contests he has played.

Dobbins will not be in uniform in Week 7, however. The Ravens ruled out their top running back for their Browns matchup. Dobbins did not practice all week, with his knee being the restriction here. It turns out Dobbins will be sidelined for another extended stretch. He will undergo arthroscopic surgery on the knee, Adam Schefter of ESPN.com tweets. John Harbaugh said Dobbins’ knee tightened up last week. 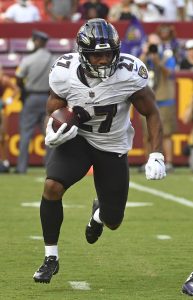 This obviously should present cause for concern, considering Dobbins was sidelined for over a year. The former second-round pick sustained major damage in the Ravens’ preseason finale last year, suffering a torn ACL, LCL, meniscus and hamstring during that seminal game. While he made a successful return in Week 3, the Ohio State product has yet to clear 50 rushing yards in a game since coming back.

Dobbins also did not factor into the Ravens’ Giants matchup down the stretch. The Ravens turned to Kenyan Drake to lead their backfield in New Jersey. Drake cleared 100 rushing yards. The Ravens were also without Justice Hill in that contest. Hill has been battling a hamstring injury, but he is no longer on the team’s injury report. Hill practiced fully this week.

Gus Edwards remains on Baltimore’s PUP list, and although the team designated him for return, the team’s other back rehabbing an ACL tear is not guaranteed to suit up against Cleveland. The Ravens have until Oct. 26 to activate Edwards, or he will miss a second straight full season.

As a rookie in 2020, Dobbins averaged six yards per carry and scored nine touchdowns. The Ravens cut Mark Ingram after the 2020 season, clearing a path for a Dobbins-Edwards backfield. Each back’s severe injury changed those plans, ushering in a procession of veterans to Baltimore last season. The Ravens used the likes of Latavius Murray, Devonta Freeman and Le’Veon Bell in 2021; none of those vets are with the team any longer.

The team signed Mike Davis and reached an agreement with Drake after his late-summer Raiders release. These appeared to be insurance additions, with Dobbins and Edwards on the way back. But the signings have been rather prominent — particularly in Drake’s case — during this season’s first half.