OCTOBER 3: While further testing is still to be done, the Broncos fear that Williams’ injury will keep him sidelined for at least an extended period, if not the remainder of the season (video link via NFL Network’s Ian Rapoport).

OCTOBER 2: As if losing a close game to a division-opponent wasn’t bad enough, the Broncos saw starters on both sides of the ball leave the game with knee injuries, according to Tom Pelissero of NFL Network. Running back Javonte Williams and pass rusher Randy Gregory will both get MRIs tomorrow morning, according to Jeff Legwold of ESPN, to determine the severity of their injuries. 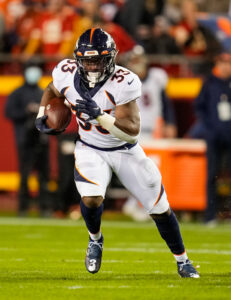 Unfortunately, it sounds like those with knowledge of the situation believe Williams injury to be a serious one, via Ian Rapoport of NFL.com (on Twitter). If Williams is forced to miss extended time, it would be a devastating blow to Denver’s offense. While the second-year running back out of North Carolina has consistently split lead-rusher duties with veteran Melvin Gordon, Williams had been the more productive back so far through three games this season.

It also doesn’t help that, after his fourth fumble of the season (the most for an NFL running back so far this year), Gordon was squarely placed in the doghouse tonight. When Williams left the game, instead of Denver leaning on the other side of its two-headed rushing attack, it was third-string veteran Mike Boone that heard his name called. Gordon did eventually return to the game, but his two carries for the remainder of the game are either indicative of the team’s trust in him right now or simply a result of the team needing to pass the ball in order to get back into a game that got away from them late.

Denver will have to figure out where it stands with Gordon moving forward, if Williams is forced to miss multiple games. Boone has extremely limited starting experience from his time in Minnesota and, with Damarea Crockett already on injured reserve, practice squad running back Devine Ozigbo is currently the team’s only other option.

Gregory also left the game with a knee injury. He was able to walk off the field under his own power but, after being examined, was carted off the sideline into the locker room. Gregory is just the latest of several Broncos pass rushers dealing with injuries this season as Christopher Allen, Jonathon Cooper, and Aaron Patrick have all dealt with ailments this season.

The defense struggled to stop the Raiders and running back Josh Jacobs following Gregory’s departure. An extended absence from the field could leave Denver’s defense hurting. If Gregory can’t suit up, young backups Nik Bonitto and Baron Browning will work opposite Bradley Chubb to get to the quarterback.

The lack of optimism is not encouraging heading towards the week, but MRIs Monday morning will inform the Broncos of just how dire their situation is.