NOVEMBER 28: Head coach Matt Eberflus confirmed yesterday’s suspicions when speaking to the media, stating that Mooney’s season is indeed over. He will be placed on IR and is “likely” to have surgery on his ankle, Eberflus added.

NOVEMBER 27: The Bears were without their leading receiver by the end of today’s game, which could very well be his last appearance in 2022. Chicago fears Darnell Mooney suffered a season-ending ankle injury, as noted by NFL Network’s Tom Pelissero (Twitter link). 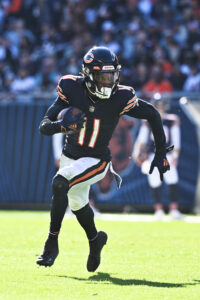 During the third quarter of Sunday’s loss to the Jets, Mooney exited the contest and did not return. Pelissero notes that further testing will be done tomorrow to gather more information, but the worst-case scenario appears to be in play at this point. The loss of Mooney could be crippling given his importance to the Bears’ offense, and the team’s limited passing game.

Mooney entered the league with little fanfare as a fifth-round pick, but he showed considerable promise as a rookie in 2020 with 631 yards and three touchdowns. He took a sizeable step forward last year, notching 81 receptions, 1,055 yards and four scores. The free agent departure of Allen Robinson left the Tulane product as Chicago’s undisputed No. 1 pass-catcher, and he operated as such with a team-leading 493 yards while the Bears remained committed to a ground-heavy offense.

Assuming the 25-year-old is sidelined for the rest of the season, Chicago will likely turn even more to a committee approach in the passing game. Tight end Cole Kmet and running back David Montgomery rank second and third, respectively, in receiving yards this season. On the perimeter, N’Keal Harry – whom the Patriots traded to the Bears this summer – and Chase Claypool – acquired from the Steelers at the trade deadline – could take on larger roles moving forward, with the likes of Equanimeous St. Brown, Byron Pringle and rookie Velus Jones Jr. also being involved.

In other injury news, the Bears saw safety Eddie Jackson carted off the field today. He suffered a non-contact foot injury, one which likewise threatens to leave the rebuilding team without a key contributor for an extended time period. Especially if the Bears continue to operate without emerging quarterback Justin Fields, the remainder of the 2022 season will be one marked by injuries hampering any attempts at an offensive turnaround in particular.

15 comments on “Bears WR Darnell Mooney Out For Season”