The Giants were one of the surprise stories of the NFL during the early portion of the season, but the team has become increasingly hampered by injuries on both sides of the ball lately. New York will soon be receiving reinforcements, however, as the team has designated three players for return from IR. 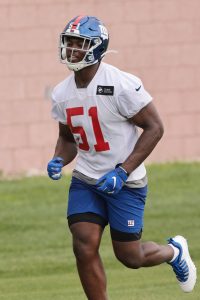 Left guard Ben Bredeson is among the trio, something which will soon give the Giants another starting option up front. The former fourth-rounder was not projected to be a first-teamer to begin the campaign, but an injury to Shane Lemieux changed those plans. Bredeson played in a rotation with rookie Joshua Ezeudu through the first two games of the season, but then operated as a full-time starter before landing on IR last month. His return may not need to be rushed, given the fact that Lemieux has since been activated.

Edge rusher Azeez Ojulari could provide the Giants with depth at the position if he is able to remain healthy. The 2021 second-rounder impressed as a rookie with a team-leading eight sacks, but has hardly played this year. Ojulari spent time on the NFI list in the summer due to a calf injury, but was not placed on IR right away with the team hoping he could suit up at some point in September. That was the case, as the Georgia product played in Weeks 3 and 4, but a reaggravation of the previous ailment has kept him sidelined ever since. If he can regain his form from last season and serve as a bookend to rookie Kayvon Thibodeaux, New York’s pass rush could receive a considerable boost.

Lastly, veteran safety Tony Jefferson‘s practice window has been opened. The 30-year-old has only played three games in 2022, after following Giants defensive coordinator Don Martindale from Baltimore to the Big Apple. The Giants are dealing with starter Xavier McKinney currently on the shelf due to an ATV accident earlier this month. That could leave defensive snaps available for Jefferson upon his return, especially if the team opts to use more three-safety packages amidst their injuries at cornerback.

Each player now has a three-week time period within which they must be activated to be eligible to play again in 2022. If all three are brought back, the Giants will have used up each of their remaining activations for the season, but they will also have at least rotational contributors in place for the stretch run.