Less than a week after the Eagles raided the veteran defensive tackle market by adding Linval Joseph and Ndamukong Suh, the Chiefs reached an agreement with another big name. 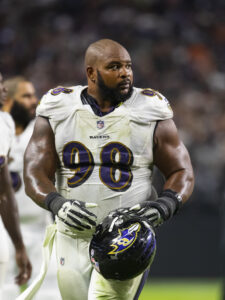 Kansas City is adding Brandon Williams on a practice squad deal, Adam Schefter of ESPN.com tweets. While Williams will take the increasingly common P-squad route, Schefter notes the intent is for the veteran interior D-lineman to move up to the active roster soon.

The Ravens did not re-sign the nine-year veteran this offseason. An eight-year starter in Baltimore, Williams has not played since last season. While Williams spent his entire NFL career in Baltimore, he played his college ball in Missouri — at Division II Missouri Southern.

Williams, 33, started 114 games with the Ravens from 2014-21. The veteran run-stuffer re-signed with the team on a five-year, $52.5MM contract in 2017 and did well to play out that contract. The Chiefs’ employment of Joe Cullen as their defensive line coach may well have played a role in Tuesday’s addition. Cullen, who spent the 2021 season as the Jaguars’ defensive coordinator, coached Williams from 2016-20 as the Ravens’ D-line coach.

One comment on “Chiefs To Add DT Brandon Williams”