One more trade has been reported just before today’s deadline. The Chiefs have dealt cornerback Rashad Fenton to the Falcons (Twitter link via ESPN’s Field Yates). Tom Pelissero of NFL Network tweets that Atlanta is sending a conditional seventh-round pick in return. 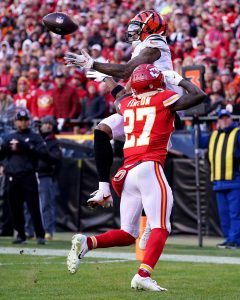 Fenton had taken on larger workload with each passing season during his first three years with the Chiefs. That continued early this year, as he saw a snap share above 90% during Weeks 2 through 5. His spot in the starting lineup has since been usurped, however, making him a logical trade candidate. The Chiefs will save $1.4MM as a result of the move.

The Chiefs invested heavily at the CB position during this year’s draft, including first-rounder Trent McDuffie. As Yates notes, the effectiveness of Kansas City’s youth movement made Fenton more expendable. Set to hit free agency in March for the first time in his career, he will have the opportunity to see significant playing time once again. Kansas City will move forward with the likes of Joshua Williams and L’Jarius Sneed at the top of the depth chart, with McDuffie set to return from IR.

Atlanta, meanwhile, is certainly set at the position in terms of having a No. 1 corner. That distinction belongs to A.J. Terrell, but Fenton will now, at a minimum, provide depth behind fellow starters Darren Hall and Isaiah Oliver. If he shows the form of his previous Chiefs campaigns, he could land himself a new deal in Atlanta come the offseason.

The 4-4 Falcons find themselves atop the underwhelming NFC South, despite ranking last in the league in passing yards surrendered (over 306 per game, on average). A move to shore up the secondary therefore comes as little surprise, as they look to return to the postseason while the Chiefs now have some financial breathing space.

6 comments on “Chiefs To Trade CB Rashad Fenton To Falcons”