Darrell Henderson did not advance too far down the waiver priority list. The former third-round pick will head to Jacksonville after a successful Jaguars claim, Ian Rapoport and Tom Pelissero of NFL.com report (via Twitter).

The Rams waived Henderson on Tuesday, clearing the way for a contract-year relocation. The Jags will add Henderson to a backfield fronted by breakout starter Travis Etienne. Just more than $400K remains on Henderson’s rookie deal. As of Wednesday afternoon, the Jags held $3.5MM in cap space. 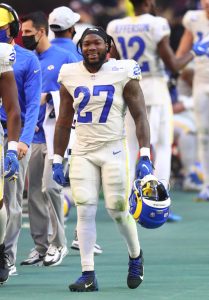 This stands to give Etienne a new backup. The Jags traded James Robinson, a two-year starter who had recovered from Achilles surgery to re-emerge in a prominent role, to the Jets earlier this season. Etienne’s quick development after his lost rookie season led to that move. Now, the team will take a look at Henderson, whom the Rams used frequently during his time in Los Angeles.

Although Henderson has not yet cleared 300 rushing yards this season, he was more productive — behind better Rams offensive lines — over the past two years. Henderson eclipsed 600 ground yards in 2020 and ’21, working as a starter for much of that span. Starting 21 games from 2020-21, Henderson combined for 1,312 rushing yards and 10 touchdowns. He averaged at least 4.5 yards per carry in each season.

Henderson, 25, joined the Rams after posting one of the better college running back seasons in recent memory. With Memphis in 2018, the eventual third-round pick rushed for 1,909 yards (8.9 per carry) and totaled 25 touchdowns. A COVID-19 contraction and MCL injury led to Henderson losing his job to Sony Michel down the stretch last season, when Cam Akers made a quicker-than-expected return from offseason Achilles surgery. But Henderson, after returning from IR, still caught three passes for 43 yards in the Rams’ Super Bowl LVI triumph.

Despite the Rams dangling Akers in trades after a midseason dispute, the former second-round pick remains on their roster. He joins fifth-round rookie Kyren Williams as the team’s post-Henderson options. The Jaguars have ex-49er Jamycal Hasty and rookie Snoop Conner behind Etienne.

The Jags’ O-line is in better shape than the Rams’ battered front, but Etienne still figures to see most of the work going forward. Henderson could appears headed toward one of the most crowded running back free agent markets since full-fledged free agency’s 1993 debut. While Saquon Barkley may not hit the market, the many other backs from a list including Kareem Hunt, Josh Jacobs, Miles Sanders, Jamaal Williams, Devin Singletary, David Montgomery, Damien Harris and D’Onta Foreman will be available.