After re-emerging for two games earlier this month, Charles Harris will see his injury-marred season will be paused again. The Lions placed the former first-round pick on IR on Monday. 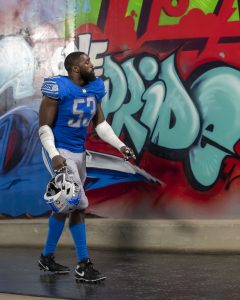 A groin injury has kept Harris on the shelf for the past two games. He will be shut down until at least Week 17. Given the timetable here, it is certainly possible the Lions — who have five injury activations left — just keep the veteran defensive end on IR the rest of the way. To take Harris’ roster spot, Detroit signed defensive end James Houston — he of two Thanksgiving Day sacks in his NFL debut — off the practice squad.

The Lions entered the year with reasonable plans for Harris, who re-signed with the team on a two-year, $14MM accord. Harris led the 2021 Lions with 7.5 sacks, helping a team that had lost Romeo Okwara to a severe injury. The Dolphins cut Harris earlier in 2021, leading him to the Lions on a low-cost deal.

Harris, who suffered the groin injury initially in Week 4, opened the season as a starter. After his first hiatus, however, he returned as a backup. The former Mizzou standout played only 24 defensive snaps in Detroit’s past two games. He has one sack and four quarterback hits this season.

A sixth-round rookie, Houston has spent the season on Detroit’s practice squad. Despite playing only five defensive snaps in his debut, Houston dropped Josh Allen twice. He figures to see more opportunities going forward. The Lions have Aidan Hutchinson positioned as their edge anchor but have dealt with considerable injury issues outside of the No. 2 overall pick. Most notably, Okwara remains on the team’s PUP list. But the Lions designated him for return earlier this month, opening the door to a late-season stretch of game action for the veteran pass rusher.