The quarterback position has been the source of plenty of uncertainty this season for the Panthers, especially in recent weeks. Another injury is forcing a change under center as the team prepares for Week 11. 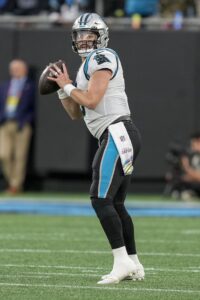 Interim head coach Steve Wilks announced on Monday that P.J. Walker suffered a high ankle sprain during Carolina’s Thursday night win over the Falcons. As a result, he will be unavailable for the team’s game against the Ravens, and Baker Mayfield will once again take on the starter’s role. Sam Darnold will serve as the backup.

Walker became the Panthers’ starter in Week 6 after Mayfield suffered his own ankle sprain. The former XFLer continued in that role even after Mayfield was healthy enough to return, though the latter replaced him in the second half of their blowout loss to the Bengals two weeks ago.

Mayfield’s performance in that game, along with the IR activation of Darnold, gave the Panthers their top two signal-callers from the offseason available to start last week. Instead, Wilks went back to Walker for the primetime rematch against Atlanta. He will likely be sidelined for multiple weeks as a result of the injury, but Wilks indicated that an IR stint is not currently being considered (Twitter link via team reporter Darin Grant).

Mayfield, who won out a training camp competition with Darnold after his long-expected arrival in Carolina, has plenty of experience against Baltimore. The former No. 1 pick spent four years with the Browns, during which time he met the Ravens on eight occasions. His level of play with Carolina before the injury was a key factor in the team’s offensive woes, and the firing of Matt Rhule.

That will lead to increased scrutiny for him as he begins his second stint as Carolina’s starter. Mayfield, like Darnold, is set to hit free agency this offseason, so improved play in the second half of the campaign from one (or both) of them could go a long way in determining their financial futures.