Penn State cornerback Joey Porter Jr. announced on Twitter today that he intends to forgo his senior season (as well as his team’s bowl game) in order to prepare for and enter the 2023 NFL Draft. The son of former NFL linebacker Joey Porter just concluded an impressive redshirt junior season that saw him breakup a career high 11 passes. 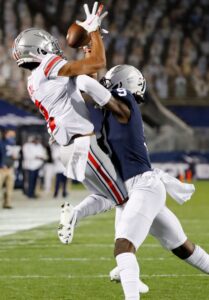 The younger Porter came to Happy Valley as a consensus four-star recruit and the fourth-best athlete in Pennsylvania out of North Allegheny HS outside Pittsburgh. Porter quickly added 40 pounds to his 6-foot-2, 160-pound frame, giving him a lean, long, NFL-ready physique. He also took his four-star potential out of high school and became the top cornerback on many pundits’ boards coming out of college. He’s a big, physical cornerback with elite speed. There’s not too much to nitpick besides his lack of turnover production.

Porter has been a staple on a Nittany Lions team that has ranked top-10 in scoring defense for each of the past two years. This season Porter held opposing receivers to 5.86 yards per pass attempt under new defensive coordinator Manny Diaz. Over his four years of play, including a true freshman season that saw him appear in only three games, Porter racked up 113 tackles, two for a loss, 20 passes defensed, and one interception.

Porter is widely projected as a first-round pick with some placing him around the early 20s. He’ll compete with Georgia’s Kelee Ringo and Oregon’s Christian Gonzalez to be the top cornerback off the board, according to early predictions from ESPN.