Not much developed between the Commanders and Daron Payne this offseason. Ron Rivera indicated interest in keeping the former first-round pick long term at the Combine, but Washington ended up taking Phidarian Mathis in Round 2. Mathis is now out for the season, and Payne is steamrolling through a productive contract year.

The prospect of Payne staying in Washington beyond 2022 is not a dead issue just yet. The Commanders are “hopeful” they can keep Payne, a team official informed The Athletic’s Ben Standig (subscription required). Payne, 25, is playing out his fifth-year option season and is on track for free agency in March. 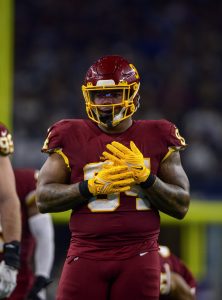 The Commanders’ refusal to part with Payne in a summer trade or a deadline deal helped them make a midseason turnaround; they are now pushing for another playoff berth during a season in which they opened 1-4. Payne played a major part of Washington’s similar path reaching the playoffs in 2020, and the Alabama product is having his most productive season at the ideal time. Payne already has totaled a career-high 6.5 sacks — a number that includes a safety — and his 13 tackles for loss are nearly double his previous best. With 14 quarterback hits, Payne is already just one shy of his career-best mark there. He is positioning himself to become one of 2023’s top free agents.

Complicating matters for the Commanders’ aim to retain Payne: their defensive line contract situation and a D-tackle market potentially set to spike. Of Washington’s four first-round D-linemen, only longtime Payne teammate Jonathan Allen is signed to a veteran contract. In addition to the prospect of Chase Young and Montez Sweat paydays, the Commanders keeping Payne would force them to allocate NFL-high money to their D-tackle spot.

Only three teams (the Eagles, Colts and Bengals) have even two D-tackles tied to $10MM-plus average salaries. Should Payne stick the landing to his contract year, he can reasonably shoot for a deal north of Allen’s $18MM-AAV extension. Allen is already the league’s fifth-highest-paid interior D-lineman, though that will almost certainly change soon. Jeffery Simmons and Quinnen Williams will undoubtedly push to bridge the gap between Aaron Donald ($31.7MM per year) and the field; Leonard Williams and DeForest Buckner are tied to the second-highest AAVs at this position — down at $21MM per annum. One agent informed Standig the expectation is the D-tackle market will balloon well past that $21MM-per-year place soon.

The Giants face a similar issue with their interior defenders. Pro Football Focus’ No. 2 overall D-tackle, Dexter Lawrence is headed toward his option year in 2023. Williams’ deal only runs through next season, however, giving Big Blue an interesting decision. The Commanders will soon face a choice of paying Allen and Payne upper-echelon money or letting the latter walk and saving up for Sweat and/or Young re-ups.

Washington would be able to create a chunk of cap space by moving Carson Wentz‘s contract off the books; the team would save $26.2MM with a release next year. Before any Wentz accounting, the Commanders are projected to possess just south of $20MM in cap space next year. A Payne franchise tag would eat into the team’s free agency cash, but this year’s Terry McLaurin extension did free up a 2023 tag. The D-tackle franchise tag came in at $17.4MM this year; OverTheCap projects 2023’s number at $18.1MM.

It will be interesting to see how the Commanders navigate their Payne situation ahead of the March tag deadline. D-tackle-needy teams will surely be monitoring that decision.