Dallas Goedert is hoping to return to the field as soon as possible. The tight end told ESPN’s Tim McManus (Twitter link) that he’s hoping to play when first eligible in Week 15. 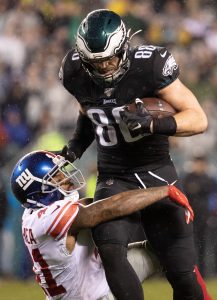 Goedert suffered a shoulder injury in mid-November that landed him on injured reserve. The tight end revealed to McManus that he actually suffered a small fracture of the glenoid bone in his shoulder. Fortunately, the injury was never expected to knock Goedert out for the season, and it sounds like he’s hoping to return when first eligible. Even if the pass catcher needs a bit more time, it sounds like he’ll definitely be back before the end of the regular season.

The 27-year-old had a career season in 2021, finishing with 830 receiving yards. Through nine games this season, Goedert hauled in 43 receptions for 544 yards and three touchdowns. At the time of his injury, Pro Football Focus ranked him fourth at the position, and Goedert had totaled the third-most snaps at his position before being sidelined.

In the two games that Goedert has missed, the Eagles have mostly relied on a combination of Jack Stoll and rookie Grant Calcaterra, with a sprinkle of Tyree Jackson. The trio hasn’t done a whole lot offensively, combining for two catches for five yards in Philly’s two games with their starter.