To begin their search to replace Scott Turner as offensive coordinator, the Commanders reached out to former Colts and Lions HC Jim Caldwell. While Caldwell has a history as an OC, Mike Garafolo of NFL.com and Ian Rapoport note (via Twitter) the veteran coach is uninterested in the position. 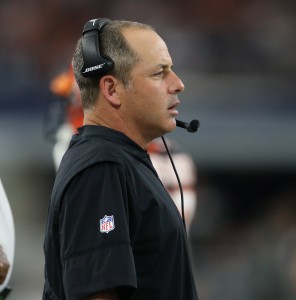 Caldwell, who has interviewed for the Broncos and Panthers’ HC jobs recently, informed the NFC East team he is only interested in pursuing HC roles at this point. Caldwell, 67, has been out of the league since a 2019 one-off as the Dolphins’ quarterbacks coach.

The Commanders are also believed to be interested in one of their own. After an ESPN report listed Ken Zampese as a possible candidate to replace Turner, the Washington Post’s Nicki Jhabvala confirmed the team’s QBs coach is on the radar for the job (Twitter link). Zampese has been with the team throughout Ron Rivera‘s tenure, serving as Turner’s QBs coach for three seasons.

Zampese, 55, has OC experience as well, having served in that role under Marvin Lewis in Cincinnati from 2016-17. The second-generation NFL assistant also coached the Bengals’ QBs in Lewis’ first 13 years at the help, bringing considerable experience to Washington after a long run coaching Carson Palmer and Andy Dalton. The Commanders are believed to remain in favor of their offensive scheme, but issues with Turner’s play-calling and philosophy led to the separation.

Most of Caldwell’s NFL experience has come as either a head coach or quarterbacks coach. He was Peyton Manning‘s position coach from 2002-08 and became Tony Dungy‘s successor in 2009, helming the Colts — during Manning’s fourth MVP season — to Super Bowl XLIV. Manning’s 2011 injury absence led to a 2-14 Colts season and Caldwell’s dismissal, but he picked up a Super Bowl ring with the 2012 Ravens, who promoted him to OC late that season. The Lions employed Caldwell for four years as their coach, and he is the only Detroit HC to post a winning record during his time with the team in 50 years. Caldwell went 36-28 with the Lions.

Caldwell has remained on the HC radar but has never been considered a frontrunner for a role since the Detroit ouster. The Packers, Browns, Jets, Cardinals, Texans, Bears and Jaguars have interviewed Caldwell from 2018-22. Despite hurdles continually appearing in Caldwell’s path to a third HC opportunity, OC gigs do not appear to interest him at this point in his career.