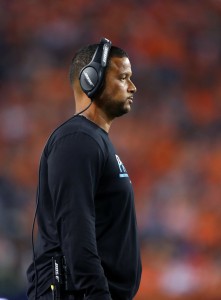 Flores has received interest in multiple coaching opportunities this offseason, including a recent interview with the Browns for their DC position. A move to Cleveland would represent a step up in title relative to his current arrangement in Pittsburgh, though the 41-year-old played a more sizeable role on Mike Tomlin‘s staff than an average position coach, of course.

The Cardinals have also reached out to Flores seeking an interview for their head coaching vacancy. If he were to land that job, it would mark a quick turnaround from his firing by the Dolphins last offseason. That move ended his three-year tenure in Miami, one which has been followed by his ongoing racial discrimination suit against the NFL in general and several teams in particular. The controversy surrounding his exit – and its subsequent effect on the 2022 coaching cycle, among other things – was a key storyline around the league.

Holcomb, 50, has been an NFL staffer since 2009. His lone season as a full-time defensive coordinator came with the Cardinals in 2018, under head coach Steve Wilks. The pair were reunited in Carolina, and Holcomb spent the 2020 and ’21 campaigns serving as the Panthers’ defensive run game coordinator. Following the firing of Matt Rhule – and the subsequent departures of multiple members of his staff, coupled with Wilks taking over – Holcomb was promoted to the role of interim DC to finish the season.

This news comes after it was reported earlier today that the Panthers put in an interview request for Jets safeties coach Marquand Manuel. That meeting is likely to concern Carolina’s DC position, so Holcomb’s future will be worth monitoring as the coaching (and coordinator) cycles take shape in the coming days. He and Flores join the Packers’ Jerry Gray and the Saints’ Ryan Nielsen as targets for Atlanta to replace Dean Pees following his retirement.