Mike LaFleur is out. According to Brian Costello of the New York Post (on Twitter), the Jets are moving on from their offensive coordinator. Connor Hughes of SNYtv first tweeted that the Jets were allowing the coach to “pursue other opportunities,” while NFL Network’s Ian Rapoport says (on Twitter) the two sides “mutually” parted ways. 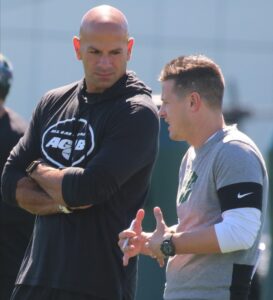 According to ESPN’s Rich Cimini (on Twitter), teams have inquired on LaFleur‘s availability in recent days. Hughes adds that the Jets spoke with their offensive coordinator over the past few days, with the two sides ultimately deciding that it was best to move on.

This officially ends the will-they, won’t-they saga in New York. As the Jets’ playoff hopes dwindled and with the offensive averaging 15 points per game over the final three weeks, there was rampant speculation that the Jets could look to make a coaching change on the offensive side of the ball. Head coach Robert Saleh, who is a longtime friend of LaFleur, backed his OC in recent weeks, noting the organization’s committed “to go young everywhere – coaches, players, staff, everybody.”

The rumors seemed to hit a peak earlier today when Aaron Wilson of ProFootballNetwork tweeted that LaFleur and the organization had parted way. Jets beat reporters were quick to refute that report, with Hughes tweeting tonight that the Jets’ initially planned to keep LaFleur as their offensive coordinator. Indeed, a source told Josina Anderson that the discussions were finalized “over the last couple of hours” (Twitter link).

The Jets will begin their OC search tomorrow, according to Costello (on Twitter). Saleh previously said that he wants to hire a veteran offensive coach that can fill the role previously held by Greg Knapp, per Cimini (on Twitter). It’s uncertain if he’ll be seeking similar qualities in a new offensive coordinator. Any new addition will have immense pressure to improve an offense that has major question marks at quarterback.

LaFleur‘s two years in New York proved to be a disappointment, with the Jets ranking mostly in the back-half of the league in most offensive categories. Still, as ESPN’s Jeremy Fowler recently wrote, LaFleur is respected around the NFL for “his play designs and understanding of the Shanahan system,” with the coach having spent four years as the 49ers passing game coordinator before joining Saleh in New York. There are three other squads with offensive coordinator openings, and if LaFleur is already generating interest, there’s a chance he lands on his feet relatively quickly.

The Jets will have a handful of additional coaching vacancies to fill. Fowler tweets that the organization will also be looking to hire a replacement for wide receivers coach Miles Austin, who is facing a suspension for violating the NFL’s gambling policy, and an assistant defensive line coach.