Although Matt Canada‘s Steelers OC stay has not produced a turnaround on offense, the Steelers continue to support him. It does not look like the team plans to move on.

The Steelers are expected to retain Canada, Gerry Dulac of the Pittsburgh Post-Gazette reports. Should this course of action commence, the increasingly unpopular play-caller will be going into his third season in this role. ESPN’s Brooke Pryor noted earlier this week momentum did not appear to exist for a Steelers change here (Twitter link). The Steelers have since confirmed Canada will stay. 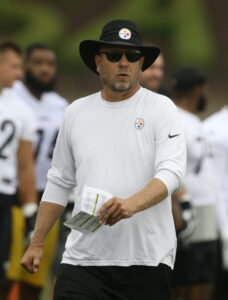 Canada has now worked with three starting quarterbacks during his time in Pittsburgh. Following Ben Roethlisberger‘s retirement, the Steelers signed Mitch Trubisky. The Trubisky bridge did not last especially long, with the team making the shift to Kenny Pickett early in the season. Canada sticking around will give the young passer some early-career continuity, though Canada’s offense will likely need to improve in 2023 to open the door to a long-term partnership. One year remains on Canada’s contract, Dulac adds.

Hired as the team’s quarterbacks coach in 2020, after serving as OC for seven college programs from 2007-18, Canada took the OC reins from Randy Fichtner the following season. While the Steelers have regressed in scoring in each of the past three years, going from 12th to 21st to 26th, the team did improve in offensive DVOA this season. After ranking 25th in this metric during Roethlisberger’s final slate, the team slotted 18th during Pickett’s rookie season.

The Steelers finished .500 or better for a 19th straight season, extending Mike Tomlin‘s streak to 16 such years. Canada’s offense was far from potent; the team’s 28 offensive touchdowns were the third-fewest in the league. But Pickett showed progress down the stretch and will enter 2023 as the team’s unquestioned starter. QBR placed Pickett 20th, and the Pitt product piloted the team to six wins in his final seven starts. During that span, Pickett engineered back-to-back game-winning drives — over the Raiders and Ravens — to end the season on a higher note. While Pickett’s 7-to-9 touchdown pass-to-interception ratio (in 13 games) leaves much to be desired, the Steelers are not planning to shake things up early in the first-rounder’s career.

Diontae Johnson, whom the Steelers handed an $18MM-per-year extension late this past offseason, set an NFL record for most receptions (86) without a touchdown. But second-round rookie George Pickens emerged as a potential standout, hauling in 52 passes for 801 yards and four TDs. Pat Freiermuth also took a second-year leap. The Steelers could use another viable pass catcher, after trading Chase Claypool, and their offensive line — a unit chock full of midlevel investments or players on mid-round rookie deals — is certainly not a top-shelf quintet. It appears the team will aim at personnel upgrades rather than overhauling its scheme.