Mike Kafka is turning into a popular name on the head coaching circuit. NFL Network’s Ian Rapoport reports (via Twitter) that the Texans have requested permission to interview the Giants offensive coordinator for their head coaching vacancy. 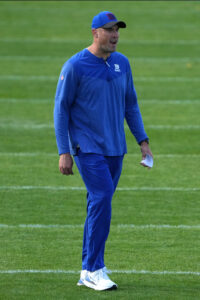 Kafka, a 2010 fourth-round pick out of Northwestern, stuck around the NFL for six years before turning to coaching. He got his first NFL gig with the Chiefs in 2017, and he quickly became Kansas City’s QBs coach and, later, their passing-game coordinator. Kafka’s stint as QBs coach coincided with Patrick Mahomes‘ ascension, so it wasn’t a huge surprise when Brian Daboll hired him as the Giants new offensive coordinator.

Kafka was entrusted with the role of offensive play-caller in New York, a surprising development considering Daboll’s offensive success in Buffalo. The Giants were middle-of-the-road in offense this past season,but Kafka was still credited with helping the offense climb out of the cellar. The team also saw strong efforts from Daniel Jones and Saquon Barkley, sparking optimism about Kafka’s ability to function with different personnel.

Thanks to the Giants’ surprising performance in 2022, Kafka has started to generate some interest as a head coach. He was previously connected to the Panthers head coaching gig, and now he’ll get a look as Lovie Smith‘s replacement in Houston.