Prior to hiring Adam Gase, the Jets requested an interview with Iowa State head coach Matt Campbell. The Browns were interested as well, before promoting Freddie Kitchens. Instead, the Big 12 leader signed an extension to stay in Ames. But Campbell is intrigued by the prospect of coaching in the NFL, according to NFL.com’s Tom Pelissero. Known for his offensive acumen and the revitalization effort he authored at Iowa State — which has started 5-2 this season — Campbell could be a more serious contender to fill one of the league’s coaching vacancies next year. Since the last time he popped up on the NFL radar, Kliff Kingsbury and Matt Rhule have made the jump. The Cyclones’ 40-year-old HC may be next.

The 2020 Dolphins will have two new coordinators, but in addition to the previously revealed Chan Gailey–Josh Boyer OC-DC setup, the rebuilding team will bring in some new position coaches as well. 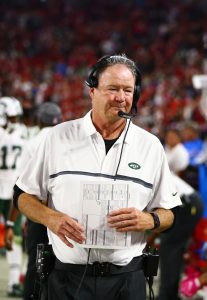 Steve Marshall will become the Dolphins’ third offensive line coach in two years, while Curt Kuntz and Austin Clark will come aboard as assistant defensive backs and outside linebackers coaches, respectively. None of Miami’s new assistants coached in the NFL this season.

Marshall will join Brian Flores‘ staff, following Pat Flaherty and Dave DeGuglielmo in the role. Both spent time as the Dolphins’ O-line coach last year. Marshall coached in the Alliance of American Football last year; his most recent NFL work came as Jets O-line coach from 2015-17. Marshall also spent time with the Packers, Texans and Browns while previously serving as offensive coordinator at Virginia Tech, Texas A&M and North Carolina.