11:38am: According to Ian Rapoport of NFL.com (via Twitter), Wayne’s one-year deal can be worth up to about $3MM with incentives, and the veteran wideout gets nearly $500K up front.

TUESDAY, 11:21am: The Patriots have officially signed Wayne, the team announced today in a press release.

MONDAY, 12:12pm: Following a weekend visit to New England, veteran wideout Reggie Wayne has agreed to a one-year contract with the Patriots, reports Adam Schefter of ESPN.com (via Twitter). A report earlier this morning had indicated the Packers would inquire on Wayne if they confirm Jordy Nelson‘s ACL is torn, but the Pats beat them to the punch, locking up the free agent receiver for the 2015 season. 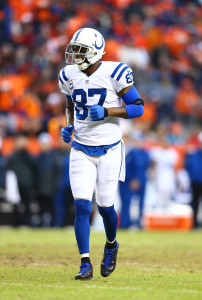 Wayne, who spent 14 years in Indianapolis after being drafted by the Colts in the first round way back in 2001, is no longer the sort of impact player he was during his prime. However, he was still a reliable target for Andrew Luck last season, compiling 779 yards and a pair of touchdowns on 64 catches. A report last month suggested that Wayne’s ideal scenario would be to play for one more season and then retire.

It may be painful for some Colts fans to see Wayne suit up for the Patriots this season, but Indianapolis’ front office made the decision to move on from the longtime Colt when his contract expired earlier this year. GM Ryan Grigson and company signed Andre Johnson and drafted Phillip Dorsett to help solidify Luck’s receiving corps in the wake of Wayne’s departure.

For Wayne, who has spent most of his career catching passes from Peyton Manning and Luck, moving to a team led by Tom Brady will mean working with another future Hall-of-Famer. Of course, if Brady’s suspension is upheld in court, it will be Jimmy Garoppolo, rather than Brady, who opens the season as the Patriots’ starting quarterback.

Whichever quarterback starts Week 1 for New England will be working with a talented group of pass-catchers that includes Rob Gronkowski, Julian Edelman, Brandon LaFell, Danny Amendola, and now Wayne. Edelman and LaFell are among the Patriots wideouts who have been slowed by injuries this summer, but neither player’s Week 1 availability is believed to be in jeopardy at this point. Adding Wayne gives the Pats a little more veteran depth as those players recover.