5:16pm: The sixth-round pick going from the Panthers to the Bears will be conditional, according to ESPN.com’s Chris Mortensen (on Twitter).

3:55pm: The Bears are getting a sixth-round pick from the Panthers, tweets Glazer. As noted below, Brad Biggs initially reported that the pick is expected to be a conditional one, so there may be conditions tied to Allen’s playing time and/or production in Carolina — for now though, it sounds like it’s just a sixth-rounder.

3:31pm: In a surprising move, the Panthers and Bears have agreed to a trade involving veteran pass rusher Jared Allen, who will head to Carolina in the deal, according to Jay Glazer of FOX Sports (via Twitter). Brad Biggs of the Chicago Tribune tweets that the Bears are expected to receive a conditional draft pick in exchange for Allen. 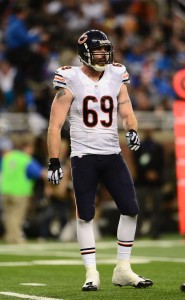 With their top pass rusher Charles Johnson sidelined due to a hamstring injury, the Panthers had been seeking defensive line help, and head coach Ron Rivera suggested earlier today that the team would consider bringing in outside help. Of course, at the time, I would’ve guessed Rivera meant bringing in a few free agents for auditions, rather than acquiring one of the more dominant pass rushers of the last decade.

Allen, who was in his second year with the Bears, recorded double-digit sacks for seven consecutive seasons prior to signing with Chicago, and never had fewer than 7.5 sacks in a season during his NFL career prior to 2014, when he recorded just 5.5. Allen still played well for the Bears, but once the team brought in new defensive coordinator Vic Fangio and his 3-4 scheme, the 33-year-old was no longer a real fit for Chicago. In three games with the Bears this season, Allen held his own against the run and grabbed an interception, but had yet to pick up a sack.

In Carolina, Allen will get a chance to play defensive end in a 4-3 system once again, and that’s the situation in which he had all of his most productive years. Of course, Allen is no longer the All-Pro player he was in Kansas City and Minnesota, but he can still be an effective pass rusher, and he should help a Panthers team that has missed Greg Hardy over the last year and will be without Johnson in the short term.

The four-year, $32MM deal Allen signed in 2014 looked questionable at the time, and looks even worse now, as the Bears paid nearly $15MM for a little over a season from the veteran defensive end, who was signed by former GM Phil Emery. The fact that this year’s Bears were willing to move on from Allen so quickly suggests that, at 0-3 and with quarterback Jay Cutler injured, the team may already be looking ahead to 2016.

Since Chicago paid Allen an $11.5MM roster bonus earlier this year, the deal works out well for the Panthers from a financial standpoint. Carolina will take on the remainder of Allen’s $1MM salary for 2015, along with base salaries of $8.5MM for 2016 and $8MM for 2017. While this year’s salary is guaranteed, the ’16 and ’17 figures aren’t, so if things don’t go well this year for Allen and the Panthers this year, the team can cut ties with him in the winter.

According to Adam Schefter of ESPN.com (Twitter link), the Bears were having trade talks involving Allen for at least a couple weeks, and other teams knew he was available, so it’ll be interesting to see what sort of pick the Panthers had to give up to land him — especially since his salary for his new team is quite modest.