The Browns confirmed today that they have interviewed Cowboys secondary coach Jerome Henderson for their head coaching position, tweets Nate Ulrich of the Akron Beacon Journal. Henderson’s meeting with Cleveland had been reported earlier this week. 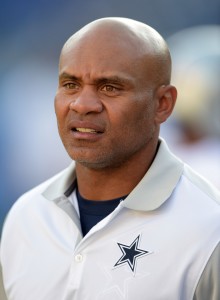 Having concluded their sit-down with Henderson, the Browns have now interviewed four candidates for their head coaching vacancy. The Cowboys’ defensive backs coach joins Lions defensive coordinator Teryl Austin, Bears offensive coordinator Adam Gase, and Jaguars assistant head coach Doug Marrone as the coaches who have spoken to Cleveland so far this week.

The Browns’ interview process will continue this weekend, but it sounds like the team’s Sunday schedule won’t be quite as jam-packed as initially anticipated. According to Mary Kay Cabot of Cleveland.com (Twitter link), the Browns don’t have a formal interview lined up yet with Bengals defensive coordinator Paul Guenther, despite a previous report suggesting he would talk to the club on Sunday. That doesn’t mean Guenther won’t talk to Cleveland — the two sides just don’t have anything officially scheduled for now.

According to Cabot (Twitter link), however, the Browns will still have a busy day on Sunday, with previously-reported meetings with Bengals offensive coordinator Hue Jackson and Panthers defensive coordinator Sean McDermott still on their schedule. The Jackson interview is set to take place in Cincinnati, with the McDermott interview happening in Charlotte.

To stay up to date on the head coaching searches for the Browns and the six other teams looking for a new coach, be sure to check out our tracker.

One comment on “Latest On Browns’ Head Coaching Search”