11:08am: The Dolphins have announced the hiring on Twitter.

10:45am: The Dolphins are set to hire Adam Gase as their next head coach, reports Adam Beasley of the Miami Herald (via Twitter). Beasley says it’s a “done deal,” with the official announcement expected to come at a 3:00pm press conference. NFL.com’s Ian Rapoport reports (via Twitter) that it will be a five-year deal. 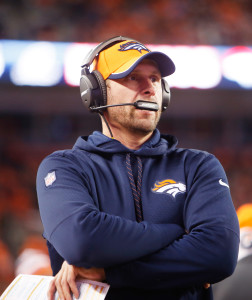 The Dolphins had previously interviewed Teryl Austin, Mike Shanahan, Mike Smith and Anthony Lynn, but it was clear from the beginning that Gase was the favorite for the position. The 37-year-old spent 2015 as the Bears offensive coordinator, helping lead Jay Cutler to one of the most efficient seasons of the quarterback’s career. Gase had spent the previous six years in Denver, where he eventually served as the team’s offensive coordinator. He has also been on the coaching staff of the 49ers, Lions, and LSU.

Gase is now the youngest head coach in the league, but that didn’t discourage suitors from pursuing the coach. He had also interviewed with the Eagles, Browns and Giants. Albert Breer of the NFL Network tweets that New York had strong interest in Gase, which may have pushed along the deal in Miami. Armando Salguero of the Miami Herald notes that Gase was a “unanimous decision” among the Dolphins staff.

Rapoport believes that Bengals defensive back’s coach Vance Joseph is expected to be the team’s new defensive coordinator, and Salguero adds that Gase’s father-in-law is Joe Vitt, an assistant on the Saints. Salguero is uncertain if former coach Dan Campbell will remain on the staff.

The Bears had anticipated Gase’s departure, according to Rapoport, and the team will now have to seek a new offensive coordinator. ESPN’s Adam Schefter tweets that Bears quarterbacks coach Dowell Loggains is the “leading candidate” for the gig.