SATURDAY, 8:45am: The Dolphins are expected to offer Gase the head coaching job at today’s meeting, reports Ian Rapoport of NFL.com (via Twitter).

7:13pm: The Dolphins will interview Gase for the second time on Saturday, tweets Adam Schefter of ESPN. As Schefter notes, Gase is the only Miami candidate who has been scheduled for a second meeting.

FRIDAY, 5:36pm: There is “growing momentum” in the Dolphins’ building for Gase to become the team’s next head coach, according to Adam Beasley of the Miami Herald.

THURSDAY, 9:59pm: On the heels of their interview, no immediate deal is expected between the Dolphins and Gase, reports Mark Maske of the Washington Post (Twitter link).

8:17pm: The Dolphins completed their interview with Gase on Thursday, per a team press release.

WEDNESDAY, 7:40pm: The Dolphins will make a “strong, strong” push for Adam Gase, Jason La Canfora of CBSSports.com tweets. Miami has been targeting him for some time, he adds, and they will make their best effort to keep him from getting back to the Eagles for a second interview. 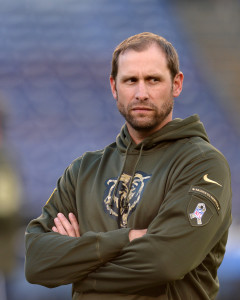 So far this offseason, the Dolphins have been casting a wide net in their coaching search, as PFR’s 2016 NFL Head Coaching Search Tracker shows. The Dolphins already have interviews in the books with Teryl Austin, Mike Shanahan, and Mike Smith from earlier in the week. On Wednesday night, the Dolphins also announced that they have completed their interview with Bills assistant head coach Anthony Lynn, who has long been identified as a head coaching candidate for the 2015/16 offseason. Gase is scheduled to meet with Miami brass on Thursday.

After working with Peyton Manning in Denver as the Broncos’ offensive coordinator, Gase joined John Fox in Chicago in 2015, and contributed to a strong bounce-back season for Jay Cutler. A year after leading the league with 18 interceptions, Cutler threw just 11 in 2015, the lowest full-season mark of his career. The Bears also ranked in the top 10 in the NFL in offensive DVOA under Gase.