The Broncos have signed defensive tackle Phil Taylor, according to Field Yates of ESPN.com (on Twitter). Taylor was cut by Cleveland in September of last year but never hooked on with another club in the 2015 season. Now, he could be a potential fill-in for Malik Jackson if the Broncos defensive lineman leaves the team in free agency. 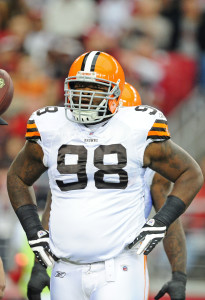 A first-round pick in 2011, Taylor was cut by the Browns at his request before the 2015 season when it became clear that Danny Shelton would be the club’s starting nose tackle. Taylor did not find an NFL home after that, though he did get glances from the Steelers, Ravens, and Vikings. In December, he worked out for Denver and he apparently made a good impression on the team.

Had he stayed in Cleveland for the season, Taylor would have earned $5.477MM in salary. Instead, he accepted a three-week injury settlement, which works out to a $966,529 payment. Fiscally, Taylor’s decision did not work out to his benefit.

Taylor was the Browns’ last remaining player from the Julio Jones trade with the Falcons several years ago. After his release, the Browns had nothing to show for that deal.