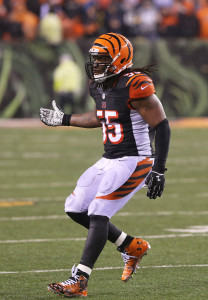 We heard earlier today that Burfict was expected to meet with commissioner Roger Goodell sometime within the next week to discuss the discipline from the league. In fact, that meeting took place on Thursday, after the decision on the linebacker’s appeal had already been made, according to Graziano (Twitter links), who reports that Burfict’s agent, head coach Marvin Lewis, and NFL executive Troy Vincent were also present.

Since Brooks had already made his ruling on Burfict’s appeal, today’s meeting was more about discussing Burfict’s behavior, addressing how to avoid further problems and violations going forward, says Graziano.

Prior to receiving his suspension last month, Burfict was reportedly fined for safety-related violations four times in 2015, including a $50K fine for unnecessarily contacting an opponent who was out of the play in Cincinnati’s Week 17 game against the Ravens. That play, which can be viewed here, saw Maxx Williams run a route in the end zone and get drilled, even though the ball was nowhere near him.

The tipping point for Burfict came in Cincinnati’s Wild Card loss against the Steelers, when he committed a personal foul penalty on wide receiver Antonio Brown, hitting him in the head at the end of play late in the fourth quarter. The 15-yard penalty played a key part in the Bengals ultimately losing that game and being eliminated from the playoffs.

The Bengals’ schedule for the 2016 season isn’t yet known, but Burfict won’t be eligible to come off the reserve/suspended list until Week 4.