THURSDAY, 4:05pm: The Chiefs announced that they have officially signed Schwartz.

WEDNESDAY, 8:18pm: Schwartz’s five-year pact is worth up to $33MM, including $15MM guaranteed, per Aaron Wilson of the Houston Chronicle (Twitter link). It also features a $7MM signing bonus and salaries of $750K, $4.9MM, $5.7MM, and then $6MM for the final two years. His base salaries for 2016 and 2017 are fully guaranteed, while his 2018 salary will be guaranteed if he’s injured. If Schwartz is healthy in 2018 and still on the roster by the third day of the league year, his salary will be guaranteed (Twitter link via Wilson).

4:18pm: The Chiefs have agreed in principle to a deal with offensive tackle Mitchell Schwartz, tweets Rand Getlin of NFL.com. It will be a five-year deal, according to Adam Schefter of ESPN.com (Twitter link). 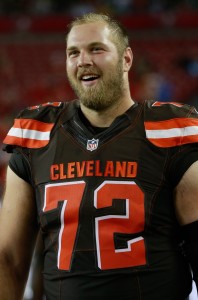 It had been quite a day regarding rumors surrounding Schwartz, as dueling reports indicated that Schwartz was at various stages of negotiation to remain with the Browns. When Mike Florio of Pro Football Talk reported that Cleveland had pulled its offer to Schwartz, it was fair to wonder if the club was merely posturing, trying to force Schwartz into accepting their latest offer.

Whatever the case, Schwartz will not be returning to the Browns, and he’ll instead head to Kansas City, which has already lost two of its own offensive lineman to free agency in the past 24 hours. Donald Stephenson, who played both left and right tackle for the Chiefs, has agreed to join the division-rival Broncos, while Jeff Allen — primarily a guard, but he can play tackle as well — will latch on with the Texans.

Schwartz, though, is clearly a superior talent to both of those players — PFR ranked Schwartz as the No. 19 overall free agent, and the No. 2 offensive tackle, behind only Russell Okung. An extremely durable player, Schwartz hasn’t missed a single start since entering the league in 2012. He’d been productive in past seasons, but 2015 was truly his coming out party, as he ranked as the sixth-best tackle in the NFL, per Pro Football Focus.

As noted, the Chiefs have lost a few players to free agency, but they’ve also kept one, agreeing to a new deal with defender Tamba Hali. They’re also in the mix to retain corner Sean Smith, and are negotiating to re-sign Derrick Johnson. The Browns, meanwhile, have now lost both Schwartz and Alex Mack from their offensive line, as well as receiver Travis Benjamin.