The team with the most cap room in the NFL will pick up a little more, according to Rand Getlin of the NFL Network, who reports (via Twitter) that the Jaguars are releasing veteran guard Zane Beadles. John Oehser of Jaguars.com has confirmed the move (via Twitter). 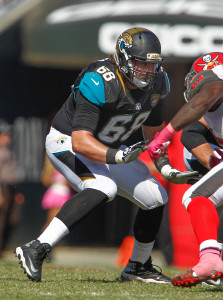 Over the Cap currently projects the Jaguars to have more than $75MM in cap room, so it’s not as if the club needs to create additional flexibility. Still, Beadles looked like one of the clearest release candidates on the roster, since the Jaguars can clear his entire $5.5MM cap hit for 2016 from their books by releasing him. The transaction should increase the club’s projected cap room to $80MM+.

Beadles, 29, inked a lucrative five-year contract with the Jaguars two offseasons ago, and has started all 32 of the team’s games at left guard since then. However, the former Pro Bowler hasn’t been overly effective since heading to Jacksonville from the Broncos. In 2015, Pro Football Focus ranked him 64th out of 81 qualified guards.

As Adam Caplan of ESPN.com tweets, the Jaguars are high on guards A.J. Cann and Brandon Linder going forward. Of course, armed with all their cap room, the Jags can also address the interior of their offensive line next week in free agency.