Free agent defensive end Mario Williams has told teams he would sign right away if given an offer of $10MM per year, according to Jason Cole of Bleacher Report (on Twitter). The Giants, Dolphins, and Jaguars are among the teams with interest, he adds. 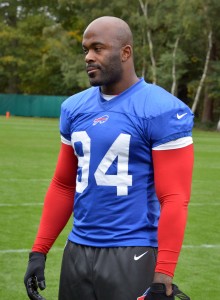 The Bills released Williams on Tuesday before he could count against their books for $19.9MM in 2016. Williams did not fare well in Buffalo’s transition to a 3-4 scheme last season, recording only five sacks — his fewest since his 2006 rookie campaign. Someone looking at Williams with an optimistic eye could argue that he would do better in a different scheme and under the tutelage of a different coach. A pessimist might say that Williams, 31, is slowing down.

Still, the former No. 1 overall pick has always performed better as a 4-3 end, recording 38 sacks from 2012-14 in Buffalo, and the Giants are among the clubs that could utilize him in that scheme.

One comment on “Mario Williams Seeking $10MM Per Year”