Defensive end Benson Mayowa is now a member of the Cowboys. The Raiders have declined to match the offer sheet on the up-and-coming edge rusher (per agency Reign Sports on Twitter), allowing him to go to Dallas. 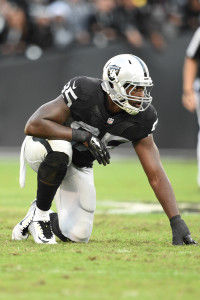 Earlier this month, the Cowboys signed Mayowa to an offer sheet promising him a three-year deal and a $3.3MM signing bonus with base salaries of $700K, $2.5MM, and $2.75MM. The final year of the contract, 2018, is voidable based on sack and playing-time incentives.

The Raiders had until Wednesday to decide whether to match Mayowa’s offer sheet, but they used only four of their five allotted days to reach a verdict. Because Mayowa came into the league as an undrafted free agent, the Raiders are not entitled to any compensatory draft picks.

Mayowa, 24, has only made three starts so far in his NFL career, but he has appeared in 30 total games for the Raiders and Seahawks. In 2015, he recorded 16 tackles, a sack, two fumble recoveries, and a safety. Despite his lack of experience, Cowboys COO Stephen Jones has said that the Raiders see a tremendous amount of upside in the youngster. Ultimately, Dallas believes that Mayowa possesses the attributes they want in an edge rusher and they’re willing to roll the dice on him a bit to see if they can mold him into a star.