The Ravens have let veteran defensive end Chris Canty know that they won’t be exercising their option to pick up the second year of his contract, according to the team’s official website. The move will ensure that Canty becomes an unrestricted free agent. 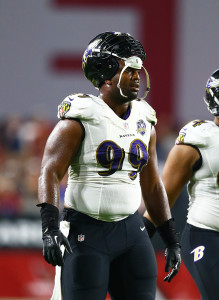 “I called Chris to thank him for what he has done for the Ravens,” general manager Ozzie Newsome said in a statement. “He has been an impactful player for us on and off the field.”

By parting ways with Canty, the Ravens avoid paying him a $150K roster bonus next week, and will clear his $2MM base salary for 2016 from their books. In total, the move creates $2.15MM in cap savings, reducing his cap charge from $2.915MM to $765K. Having reworked Joe Flacco‘s contract and released linebacker Daryl Smith, Baltimore continues to carve out small chunks of cap room.

Canty, a 10-year veteran, joined the Ravens prior to the 2013 season, after spending his first eight years in the NFC East with the Cowboys and Giants. In three years with Baltimore, Canty started 23 of 35 games he played, registering 84 total tackles and 3.5 sacks. While his impact on the field wasn’t necessarily significant, the 33-year-old was a solid rotation player and a good presence in the locker room.

While Canty appears likely to sign elsewhere, it’s worth noting that last offseason, the Ravens cut the defensive lineman in February, only to re-sign him a few weeks later in March. As Jeff Zrebiec of the Baltimore Sun tweets, Canty isn’t ready for retirement and wants to continue his career, so we’ll see what his market looks like.