FRIDAY, 8:14am: Dansby’s one-year contract has a base value of $2MM, with another $250K available in incentives, tweets Tom Pelissero of USA Today. The deal also features a $700K signing bonus.

WEDNESDAY, 9:40am: The Bengals have made the signing of Dansby official, announcing the move today (via Twitter).

TUESDAY, 9:55am: Having been released earlier this month by the Browns, veteran linebacker Karlos Dansby has found a new home, but he won’t be going far — his new team plays in the same state and the same division as his old team. 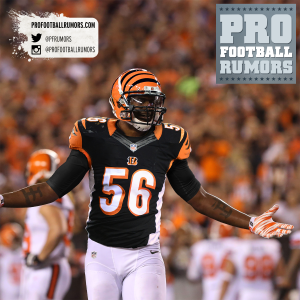 According to Ian Rapoport of NFL.com (via Twitter), Dansby is set to sign a contract with the Bengals. Geoff Hobson of Bengals.com had reported earlier this morning (via Twitter) that talks between Dansby and the Bengals were heating up.

Dansby, a former second-round pick, racked up 109 tackles, forced three fumbles, and intercepted three passes, including two for touchdowns, during the 2015 season. Pro Football Focus ranked him 25th out of 97 qualified non-rush linebackers. However, having decided to go younger on defense, the Browns opted to cut the 34-year-old with two seasons left on his four-year contract.

At the time of his release, Dansby told Mary Kay Cabot of Cleveland.com that he wouldn’t mind joining a Super Bowl contender like the Bengals, Packers, or Cardinals. “Yeah, I think the Bengals are licking their chops right now,” the linebacker said. “I hope they are. We’ll see what it is.”

The Bengals have some depth at linebacker, with Rey Maualuga, Vontaze Burfict, Vincent Rey, and A.J. Hawk among the available options for the three starting jobs. Still, the team did lose Emmanuel Lamur in free agency, and Burfict will serve a suspension to start the 2016 season, so adding a player like Dansby certainly won’t hurt.

Because Dansby was released by the Browns, he won’t count toward the compensatory pick formula for 2017’s draft. Cincinnati has lost several noteworthy free agents this year, including Marvin Jones, Mohamed Sanu, and Andre Smith, so the club should be in line for a few extra draft picks next year.

Dansby is also said to have received some interest from the Seahawks, though his only reported visit was to Cincinnati.