After hosting them on free agent visits last week, the Bills have added a pair of defensive players and special-teamers to their roster, the team announced today. Per a press release, Buffalo has agreed to terms with linebacker Lorenzo Alexander and safety Colt Anderson. 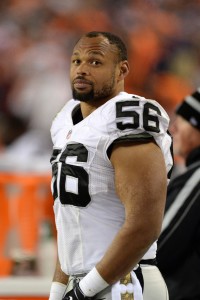 Alexander, 32, has spent time in Washington, Arizona, and Oakland since entering the league in 2007, making 16 starts during that span. However, a significant chunk of Alexander’s playing time during his 127 career NFL games has come on special teams — he was named a Pro Bowler in 2012 based on his special teams contributions.

As for Anderson, the veteran safety has similarly established a reputation as a special teams ace. Out of his 77 career NFL contests for the Eagles and Colts, he has started only seven, playing sparingly on defense.

As Tyler Dunne of the Buffalo News tweets, the Bills view both new additions as special teams signings rather than players expected to contribute much on defense, since the special teams unit was a problem for the Bills in 2015.

The two signings also increase the Bills’ roster count to 75 players. The team still needs to add its drafted players to that total, meaning there won’t be much room left to sign many undrafted rookies unless some cuts are made within the next few weeks. Buffalo may be counting on veteran players to fill the back-of-the-roster openings that might otherwise be occupied by UDFAs or late-round picks.