Chiefs Tried To Trade Up For Laquon Treadwell

The Chiefs tried to trade up to get wide receiver Laquon Treadwell, according to Alex Marvez of FOX Sports (on Twitter). After the Ole Miss product went to the Vikings at No. 23, the Chiefs traded out of the first round. 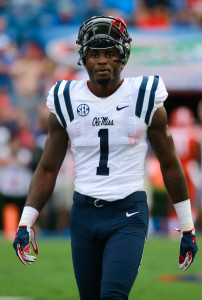 Treadwell, was widely projected as a top-15 pick before a slow 40-yard dash time and other concerns about his game hurt his draft stock.