Talks between the Broncos and 49ers regarding quarterback Colin Kaepernick have gone dormant in recent weeks, but the door isn’t yet closed on Kaepernick ending up in Denver before next season. Even after reporting to the 49ers’ voluntary workouts earlier this month, Kaepernick still doesn’t want to continue his career with the club and the feeling is mutual from ownership, CBS Sports’ Jason La Canfora reports.

The acrimony between Kaepernick and 49ers brass is why the Broncos haven’t budged in trade talks, per La Canfora, who 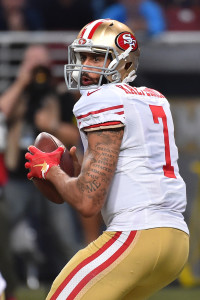 writes that Denver is holding out hope that the quarterback will reach an injury settlement with San Francisco and become a free agent. Kaepernick underwent left shoulder surgery in November and should be able to resume football activities in May.

Going forward, Kaepernick has five years left on his contract and is due a guaranteed $11.9MM in 2016. As of two weeks ago, the Broncos were reportedly hoping to push that $11.9MM number down to $7MM and have Kaepernick also take pay cuts in the other years of his deal. However, Tim Kawakami of the San Jose Mercury News reported then that Kaepernick’s camp was committed to either keeping the salaries intact or changing the contract to allow him to hit free agency next offseason, when his controlling team could cut him before his salary becomes guaranteed for 2017.

A resolution on the Kaepernick situation is possible before or during the upcoming draft, which is when La Canfora expects trade talks to intensify again. The 49ers hold the seventh pick and could potentially draft Kaepernick’s replacement – though both Cal’s Jared Goff and North Dakota State’s Carson Wentz should be off the board by then – thus helping to usher No. 7 out of town. The Broncos are set to pick 31st and could put the notion of acquiring Kaepernick to bed by selecting a signal-caller with that choice. Otherwise, if Kaepernick isn’t a Bronco by the end of the first round, he’d look like a rather appealing option compared to Mark Sanchez and Trevor Siemian, Denver’s current top two QBs.

10 comments on “Latest On Colin Kaepernick”