SATURDAY, 3:48pm: Davis’ deal is indeed a one-year accord worth $2.38MM, Mike Klis of 9News tweets. The 12th-year tight end receives $1.1MM in full guarantees, and Davis can earn up to $2.1MM more via incentives, per Klis. Despite disappearing from Denver’s offense down the stretch and in the playoffs, Davis presently resides as Washington’s highest-paid tight end.

THURSDAY, 4:22pm: The team has officially announced the signing.

THURSDAY, 11:05am: Free agent tight end Vernon Davis is headed home, having agreed to terms to sign with Washington, according to Jason La Canfora of CBSSports.com (Twitter link). In addition to being a homecoming for the D.C. native, the deal also reunites Davis with former 49ers executive Scot McCloughan, who was San Francisco’s VP of player personnel when Davis was drafted. 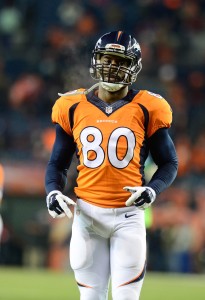 The sixth overall pick back in ’06, Davis averaged 50 catches per season during his first eight years in the NFL, racking up 53 total touchdowns and earning two Pro Bowl nods during that stint. However, he has slowed down in recent years, with inconsistent quarterback play, injuries, and his increasing age all playing a part in that decline.

Although Davis, traded from the 49ers to the Broncos midway through the 2015 campaign, didn’t have his best season last year, he still managed to catch 38 passes, including 20 after moving to Denver. In Washington, the team has a clear-cut No. 1 tight end in Jordan Reed, so Davis shouldn’t be relied upon as more than a complementary option as long as Reed stays healthy.

Washington has apparently been on the lookout for additional pass catchers to join Reed, DeSean Jackson, Pierre Garcon, and Jamison Crowder as Kirk Cousins‘ top targets for 2016. In addition to reaching a deal with Davis, the team also brought in veteran wideout Anquan Boldin for a visit earlier this week.

According to Adam Schefter of ESPN.com (Twitter link), it’s a one-year contract.