TUESDAY, 6:14pm: The Bills have officially announced the deal.

5:22pm: The Bills and Cordy Glenn have agreed on a new five-year deal, ESPN.com’s Adam Schefter tweets. Glenn signed his franchise tender in early March but the two sides have been working hard to hammer out a long-term pact. Financial terms of the deal are not yet known. 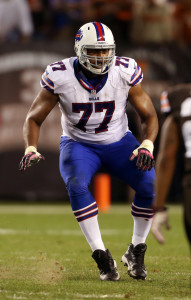 The 26-year-old Glenn has been a quiet stalwart in Buffalo the past few seasons and has started 61 games since being selected in the second round in 2012. Glenn rated as Pro Football Focus‘ No. 10 overall tackle and fifth-best left-edge protector last season, and had been considered one of the top priorities for the Bills heading into free agency, along with fellow offensive lineman Richie Incognito.

Having been one of the NFL’s most cap-strapped teams heading into this offseason, the Bills had to make several other roster moves to help accommodate the franchise tag for Glenn and additional offseason business. At the outset of the offseason, the club restructured Corey Graham‘s contract, and cut several veteran players, including Mario Williams, Kraig Urbik, Leodis McKelvin, and Anthony Dixon.

In the long term, the Bills have managed to reduce Glenn’s 2016 cap hit by inking him to a longer-term extension. Had he played out 2016 under his old deal, Glenn would have carried a $13.7MM cap hit. Glenn is a client of Pat Dye, an agent with a track record for guiding franchise tagged clients towards extensions.

Now that Glenn has been taken care of, the Bills will likely try and work out deals with teammates Tyrod Taylor and Stephon Gilmore. Both players are entering their walk seasons.