It’s mid-May, and one of this offseason’s most talented free agent defensive ends remains on the open market. As Greg Hardy continues to look for work, agent Drew Rosenhaus has sent a packet to teams teams detailing the work his client is doing to improve as a person and correct his pattern of bad behavior, a source tells Mike Florio of PFT. 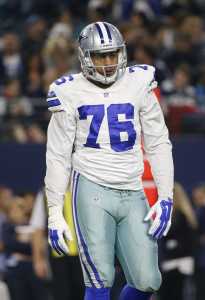 Hardy, according to Rosenhaus’ literature, is working to fix his missteps both on and off the field. Of course, Hardy is considered bad news for his alleged domestic violence incident which sidelined him for most of the 2014 season. More practically speaking, however, teams are worried about Hardy’s bad attitude and suspect work ethic.

Hardy has been evaluated and treated by multiple NFL physicians, Rosenhaus & Co. say, and the former Pro Bowler has undergone therapy for anger management and also some evaluation for ADHD. This year, Hardy is said to have participated in at least two dozen therapy sessions.

On the field, Hardy still has plenty to offer, but the Cowboys decided after the 2016 season that they were done dealing with the off-field headaches that come with him. Last season, Hardy ranked as the league’s 28th-best edge defender out of 110 qualified players, according to Pro Football Focus (subscription required). Heading into the offseason, we here at PFR ranked Hardy No. 21 on our list of top 50 free agents.