SUNDAY, 12:32pm: 49ers running back Jarryd Hayne has announced his retirement from the NFL, according to the team’s official website. Hayne, of course, was born in Australia and put together a very impressive rugby career before announcing in October 2014 that he intended to pursue his dream of playing in the the NFL. 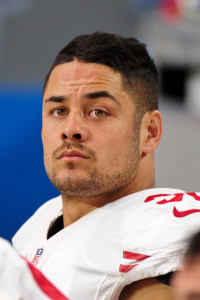 In March of last year, the 49ers signed Hayne to a three-year deal, and he ultimately made the team’s 53-man roster on the heels of a successful preseason that only added to the considerable hype surrounding Hayne. He racked up only eight carries over San Francisco’s first six regular season games, though he did return at least one punt in each of those contests, including a memorable muffed punt in the team’s Week 1 matchup against the Vikings.

The 49ers waived Hayne on October 31, 2015, but he was ultimately re-signed to the club’s practice squad after clearing waivers. He was promoted from the practice squad back to the 53-man roster for the final two weeks of the season, picking up nine carries for 27 yards and five receptions for 20 yards in the team’s penultimate game against the Lions.

He finishes his NFL career with 17 carries for 52 yards and six receptions for 27 yards, to go along with eight punt returns for a total of 76 yards. He will return to the sport he starred in for so long, joining the Fiji Rugby Sevens for the upcoming Olympic Games.

Hayne and the 49ers have both issued formal statements, which can be found at the above link.