Jake Long Working Out For Bears

Offensive tackle Jake Long is working out today for the Bears, according to a source who spoke with Adam Schefter of ESPN.com (via Twitter). 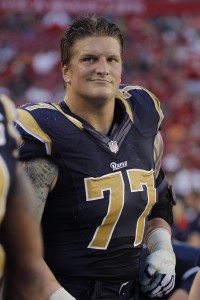 Long, 31, spent the 2015 season with the Falcons after signing on midway through September. The former No. 1 overall pick was hoping to have a bounce-back season in Atlanta but he wound up only appearing in four games and he didn’t start in any of those contests. In the year prior, Long saw time in just seven games for the Rams last season due to a torn ACL. In the year before that, Long also tore his ACL in St. Louis.

In 2014, Long’s last season which could be measured by advanced metrics, Pro Football Focus (subscription required) ranked Long as just the No. 36 tackle out of 84 qualified players. In 2013, however, Long graded out as the seventh-best tackle in the league with a strong 22.5 overall score, based on PFF’s advanced metrics. Those numbers suggest that Long could still be a productive player if he can return to full health.