With roughly three weeks until the extension deadline, the assumption is that Redskins quarterback Kirk Cousins will play out the 2016 season on his $19.95MM franchise tender, sources from both sides tell Albert Breer of The MMQB. While talks are “amicable” between both sides, Breer hears that they are basically going nowhere. 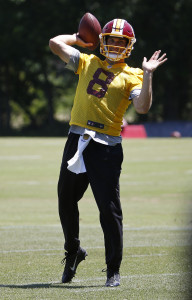 Cousins’ reps are negotiating on the premise that Cousins can earn roughly $44MM over the next two years if he is tagged for the 2016 and 2017 seasons. The Redskins, meanwhile, are reluctant to meet those numbers in the first two years of a contract (and, presumably, reflect those salaries beyond 2017) since they want to see Cousins prove himself all over again. As Breer notes, the Redskins may be playing a dangerous game with their QB. If, as expected, Andrew Luck signs a record-breaking extension and Cousins turns in another strong year, then their quarterback’s asking price will skyrocket.

Another factor to consider is the impact of the Josh Norman signing on the Redskins’ salary cap. The cornerback’s massive deal will carry a $20MM cap hit in 2017. Therefore, if Washington were to exercise the franchise tag on Cousins next season at $24MM, more than 25% of its cap space would be dedicated to two players, and that’s a pie chart that no NFL team wants to be facing.

Cousins, 27, became Washington’s full-time starting quarterback for the first time last season, earning 16 of his 25 career starts in 2015. The four-year veteran finished the regular season on a tear, completing 74% of his passes for nearly 1,200 yards, 12 touchdowns, and a 134.0 quarterback rating over the final four weeks of the year.