4:28pm: Head coach Jeff Fisher spoke about Foles’ situation Wednesday, saying, “He has not been here to participate since the draft … We’re trying to work things out.” Fisher continued, “Nick has the feeling if things stay the same, he’s probably not gonna be on the roster” (Twitter links via Albert Breer of NFL.com).

Fisher also called Foles’ absence “more of a mutual thing,” writes Josh Alper of Pro Football Talk. Based on that, it appears Foles’ time with the Rams is done. Now it’s just a matter of whether they’ll be able to find another team to take him via trade.

10:35am: Nick Foles is none too pleased with the Rams this offseason. The quarterback, who was a regular when offseason workouts began April 18th, has not participated in a team practice since the Rams selected Jared Goff No. 1 overall, as ESPN.com’s Jim Trotter writes. Multiple sources have confirmed that Foles has been abstaining from team-run training sessions and the start of OTAs because the Rams drafted a quarterback. 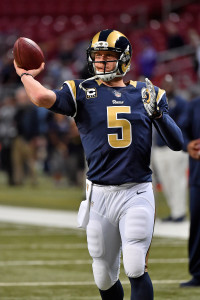 Acquired by the Rams in the trade that sent Sam Bradford to the Eagles, the two quarterbacks have wound up in strikingly similar situations. Last offseason, Foles inked a two-year, $24.5MM extension that included nearly $13.8MM in guarantees. Now, it’s clear that he is not the quarterback of the future in Los Angeles and maybe not even the quarterback of the present. Last season, Foles opened the season as the starter under center but was benched in favor of Case Keenum after throwing seven touchdowns against six interceptions.

Foles drew trade interest from teams in late April and the quarterback presumably wants the team to ship him elsewhere. Because the Rams have already paid his guaranteed $6MM roster bonus for the 2016 season, Foles would come at a very affordable rate for any team interested in acquiring him — only his $1.75MM base salary for ’16 would count against a new team’s cap. Of course, his new team would also take on the rest of his contract, including a non-guaranteed $10.75MM base salary for 2017.

Foles has plenty of starting experience and could be a good fit as a backup elsewhere. Meanwhile, Los Angeles could roll with Goff, Keenum, and 2015 third-rounder Sean Mannion on the depth chart. It remains to be seen whether Goff or Keenum can deliver in 2016, but the team probably sees more potential in those two players than Foles, a fifth-year pro.